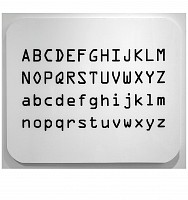 Maria Park's work examines ways that technology intervenes in our participation in the world. Ranging from serially based paintings to site-specific installations combining studio-produced and manufactured objects, her work explores human presence and agency within a media-reliant society. Since graduating with an MFA in Painting from the San Francisco Art Institute in 2003, Park’s works have been included in numerous exhibitions both nationally and internationally. Museum projects include solo exhibitions at The Kemper Museum of Contemporary Art in Kansas City, MO and the Museum of Contemporary Art in Santa Rosa, CA, and group exhibitions at the Johnson Museum of Art in Ithaca, NY, Contemporary Art Museum in St. Louis, MO, and the Seoul National Museum of Art in Seoul, South Korea.

In 2012, Park was commissioned a permanent installation for the new building at Johns Hopkins Hospital in Baltimore, MD and has recently completed the design of artwork for the central subway temporary barricade at the Chinatown Station in San Francisco, CA, commissioned through the San Francisco Arts Commission in partnership with San Francisco Municipal Transportation Agency. Awards include the MFA Grant Award from the Joan Mitchell Foundation (2003) and the Korea Arts Foundation of America Award (2002), and the Murphy Fine Arts Fellowship from the San Francisco Foundation. She is an Associate Professor and Director of AAP Exhibitions and Events in the College of Architecture, Art, and Planning at Cornell University.

Born 1972 in Munich, Germany
Lives and works in New York

1999
They Hold Up Half the Sky, SOMA Cultural Center, San Francisco, CA

2012
Moore, Tom, An interview with Maria Park, Connecting with Cornell, 23.1
Ernestina Snead, Landscape, and Image or an Encounter with Nature?